For quite some time now I have been wanting to photograph the stars in the Brecon Beacons with snow on the ground. There are several factors involved for this to be successful – the moon must be new and below the horizon, there must be no cloud, there must be snow on the ground and my wife’s shift pattern means I can only do this on 26 weeks of the year. When I saw the forecast, I knew I had to make an attempt. I packed my bag with my two cameras (one normal, one Infrared), two lenses, remote timer and tripod. I also took a headtorch, spare batteries, GPS (to geotag photos), map, compass, whistle, survival bag, food, drink, spare clothing, spare gloves and had my phone too. I also made sure my wife knew where I was going and what time I was expected back. The reason for all the equipment and planning was because this sort of trip and being in the mountains in the pitch black with snow on the ground isn’t without its dangers. I have spoken to Mountain Rescue about this trip and they said I sounded very well prepared.

The trip almost started in disaster when less than a mile from the house in Pontardawe, a woman driver came out of a junction without looking – fortunately she stopped with a shocked look on her face after I beeped the horn and braked hard. She then proceeded to tailgate me all the way to Ystradgynlais.

I arrived at the Storey Arms lower car park in good time and started up the path. I managed to walk most of the way in the failing light using my night vision until I met a group with headtorches. With my headtorch now on and the night black, I reached the ridge below Corn Du and decided to head to Pen y Fan. Having not had the chance for much exercise recently, I was very pleased to get to Pen y Fan without having stopped for a break since leaving the car. The first thing I did was put more clothes on to make sure I didn’t get cold. Once that was done, I set the camera up and shot the summit cairn with stars but I haven’t processed this photo yet. I looked to photography Cribyn from the summit, but looking down on it meant I would have very little sky in the photo so decided to head to the summit of Corn Du. On the way, I spotted some lovely white grass and decided this would be a great foreground. I set the camera up low to the ground and proceeded to take some photos. Because you can’t see anything through the viewfinder, you have to take a photo to see how your composition is. Once happy, I took a 30 second photo at ISO3200 with the lens set at f4 and focussed on infinity. This exposed the sky perfectly, but left the foreground dark. I then took a 150 second exposure which burnt the sky out but exposed the foreground perfectly. I could have used my ND grads, but I’d left them at home to save weight and space.

The whiter patch of the sky is the Milky Way and the cluster of stars to the left of the top, center are the Pleiades. I didn’t realise until I processed this photo, but I also captured the Andromeda Gallaxy! 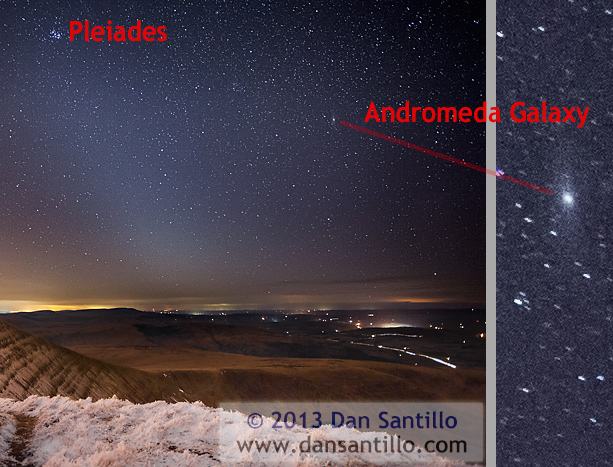 Pleiades and the Andromeda Galaxy

Happy that I had captured this angle, I carried on the path up to the summit of Corn Du. I’ve been on Corn Du in a wind chill of -27 so this was fairly mild by comparison. I also knew where one of the best viewpoints of Pen y Fan was having been there several times before. I set the camera and tripod up and did the same again, shooting one exposure for the sky and another for the foreground. 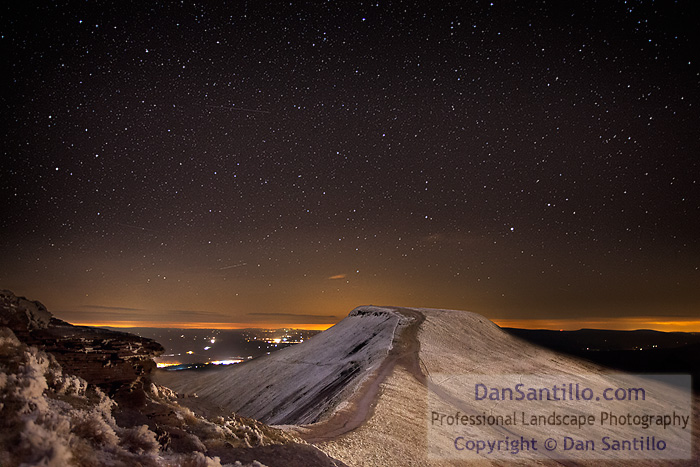 I was starting to feel a little chilly so decided it was time to head to my final location for the night – back to the ridge below Corn Du where there is a great viewpoint of the entire massif. When I arrived, I found a nice spot, settled down on the ground and composed a photo. I then set the camera taking a series of 30 second photos with the aim of making a time-lapse movie. I put on my full wet weather gear as it is a phenomenal windproof layer that keeps me extremely warm. By now I was wearing three layers on my legs (thermals, Craghopper fleece winter trousers, waterproof trousers) and seven layers on my torso (thermal base layer, base layer, microfleece x 2, fleece coat, soft shell, waterproof coat). It might sound a lot, but whilst I was sat on the ground, my black camera bag turned white with frost! And I still had a spare microfleece in my bag. I drank my flask of coffee, ate my frozen bar of chocolate and occasionally held the tripod when a gust of wind came over the ridge. Without warning, a cloud bank swept over the scene and my night photography was finished.

To fully appreciate this very short video, you need to watch it at 1080p in full screen.

I packed everything away and started the walk back to the car. It wasn’t long before I had to take layers off. I arrived safely back at the car, drove back home and was in bed by midnight.

I posted the photo of Pen y Fan from Corn Du on Facebook the following day and the response has been phenomenal. There have been many comments about my suffering and endurance, but in all honestly I didn’t feel it a struggle and thoroughly enjoyed every second of it. I’m already planning future trips, possibly staying out all night to shoot a long video so watch this space.