Last night I headed to Rhossili Bay to photograph stars. I’ve shot star trails there before, but this time I wanted to capture the stars as pin pricks. I had checked everything but had forgotten to look at the moon forecast so was a little disappointed when I saw there was a half-moon high in the sky, but the weather has been so bad recently that I decided to go anyway. I met up with Emma and we walked down onto the beach in the dark. The wind was pretty bitter and a little too strong for my liking, but we were there so got our equipment out and set about finding a good composition – not easy in the dark when you can’t really see through the viewfinder! We tried walking all around the Helvetia Wreck, trying various viewpoints but with the wind and tripods sinking into the sand it wasn’t easy. Just as we were about to leave I spotted that I could capture the Milky Way, the Plough asterism, the Helvetia Wreck and the Old Vicarage on Rhossili Down all in one photo! I had to keep the tripod close to the ground to reduce the chances of the wind vibrating the tripod. I was using my new TriggerTrap gadget which made it very easy to see what I was doing, although I had to keep my gloves off to use the touch screen.

Rhossili Bay, The Helvetia Wreck, The Milky Way and The Plough

This was the last composition I tried before it was time to leave – it’s surprisingly difficult to find the steps back up to the cliff top in the dark even with torches! We drove back to Penmaen to where I’d left my car – Emma had to go back home, but I walked down to Penmaen Burrows for more astrophotography. Watch this space as there is another photo coming soon :-)

Here is the Plough highlighted. I used a very wide angle to the lens which has distorted the edges of the photo, pushing the Plough slightly out of shape. 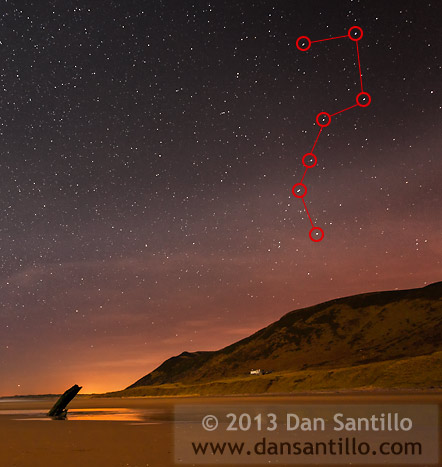 The Plough or Big Dipper